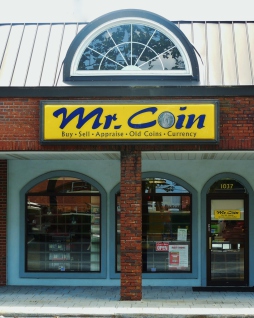 Always closed on Sundays and Mondays!

Introduced in 1986, the American Silver Eagle Dollar is an authentic legal tender coin struck by the United States Mint. Containing 1-troy ounce of .999-fine silver, it is a way for the U.S. Government to compete with silver bullion coins produced by other countries. By design, the face value of $1.00 is less than the intrinsic precious metal value. The American Silver Eagle Dollar has since become the predominant silver bullion coin in the world and is a favored way of acquiring silver. The uncirculated coins are distributed primarily by dealers and cannot be purchased by individuals directly from the U.S. Mint.

The obverse (front) of the dollar features a re-creation of the popular “Walking Liberty” design of A.A. Weinman, as displayed on the half-dollars from 1916-1947. The reverse features a modern design by John Mercanti of a heraldic eagle and the inscription “1-OZ FINE SILVER – ONE DOLLAR”.

The official U.S. silver bullion is composed of 99.93% silver with less than 1% copper added to achieve hardness and durability. The coin weighs 31.101 grams and is 40.6 mm in diameter-the largest silver dollar produced to date by the U.S. Mint.

Each coin bears its year of mintage and, according to the quantity produced for that particular year, may develop a significant numismatic premium.

Uncirculated or Proof, ungraded or certified, we maintain almost a full range of all of the American Silver Eagles released!